Few topics have the capacity to create more contention than the issue of immigration. The mere mention of it loads a room with an uncomfortable air of fear, anger, bitterness and upset. It has, wrongly, become a subject which ‘polite society’ now collectively avoids, in fear of ruining a perfectly good dinner party.

Borders, however, fascinate me. I remember as a child traveling by coach to the swiss alps for a skiing holiday. I couldn’t understand how it was possible to travel through multiple countries without even touching the brakes. Conversely, I’ve stood, many times, in long queues, with my heart rate and stress level accelerating as I approach the grey-faced immigration official at my desired port of entry.

Without wanting to over-politicise this blog, I can’t help but notice the devolution society seems to be going through, as we opt for sovereignty at the expense of unity. Where fear mongering leads to building walls and strengthening borders, rather than investing in diplomacy and pursuing peace; where the information age, which once promised to bring us together, now gives voice to those who wish to drive us apart.

Immigration is no simple issue, and I, for one, am not blind to the validity of arguments on both sides of the fence, but when we build our walls, we create a vacuum which tends to become insulated with fear, misinformation and mistrust.

What with Trump’s wall, Britain’s Brexit, and the Corona Virus, we have rarely been so aware of our own borders.

Last month I visited the border between India and Bangladesh, where everyday women and young girls are trafficked to an unknown future, often on the false promise of a job or the pretense of a runaway romance with a mysterious man. Sadly, in most cases, those lives disappear forever into a labyrinth of exploitation. Some, however, are found and saved from these situations of woe, only to end up languishing for years in an Indian shelter home, awaiting permission to return.

Justice and Care, one of our beneficiaries at Blue Bear, started a project in Bangladesh four years ago, looking at how they could improve this process and see survivors repatriated as expediently as possible. They developed this project together with a number of aftercare facilities and employment providers in Bangladesh, to ensure that the survivors are protected from re-entering a cycle of abuse. This project has expanded to include training the Bangladeshi Border Guards to spot the signs of trafficking and intervene before more lives are lost. Every month, women and girls are stopped and prevented from walking the extra 10 metres into a future of exploitation and suffering.

A few weeks ago, my colleague and friend Tariqul Islam, the director of this project, came to London to attend an awards ceremony held by the Thompson Reuters Foundation. He and Christian Guy, Justice and Care’s CEO, received the Stop Slavery Collaboration Award in recognition of their effective partnership with the Bangladeshi Border Guards.

Partnerships are the cornerstone of this project. Partnerships with the Border Guards, the NGO’s in India, the aftercare providers in Bangladesh. The whole project is leveraged on effective partnerships. Traffickers intentionally move people across borders to a place they don’t know, often with a different language, culture, police force, to increase their vulnerability. They exploit our differences for their own nefarious gain. It is in our ability to partner, beyond our borders and differences, which gives us the best chance of combatting this evil. We need to grow our networks in this fight. Would you join us?

Does your business use coffee? Do you care about stopping human trafficking? If you would like to find out more about partnering with Blue Bear Coffee Co. email: info@bluebearcoffee.com 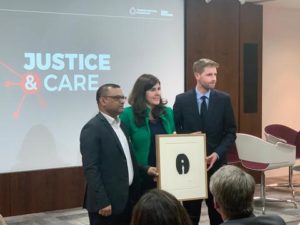