Amazing wasn’t it!? Wembley stadium housed a capacity crowd last night to watch England’s Lionesses defeat Germany in the Women’s European Championship Final. It was spectacular! The whole event was more than a sporting competition but a celebration of freedom, equality, and progress. Rather than larger louts swinging punches at each other, both sets of fans remained long after the game had finished to sing songs, wave flags and enjoy the night together.
The stadium’s seats were filled with an equal mix of men, women, and children who felt safe and unintimidated by the party atmosphere. A refreshing departure from the scenes of last year’s men’s final, where thousands of boozed-up English thugs attempted to force their way into the stadium without paying and later demonstrated their feelings of loss, by aiming punches and throwing glasses at the opposition’s support. A sorry sight indeed.
The women’s game has had little to no attention for decades, but the last few weeks have caused many football lovers to question why that is. For some, it’s a simple answer, “because football is a boy’s sport” or at least that has been the generally accepted belief for as long as I can remember. But it hasn’t always been that way.

I was surprised to learn that women’s football was widely enjoyed during the first world war when fighting-aged men were conscripted to the battlefield. The women’s game remained popular following the war’s end, with a boxing day charity match in 1920 at Everton’s Goodison Park that saw a record 53,000 fans attend to watch Dick Kerr Ladies team square off against St Helen’s. This record remained in place for 98 years, much owing to the ban on women’s football that would soon follow it. In 1921, worried that the sport was taking too much attention away from the post-war men’s game, and in a wider political move to return women to their traditional roles, the Football Association (FA) officially excluded women from competing on their grounds or using their training facilities. The women lost all FA accreditation and the ban remained in place for 50 years, until it was finally overturned in 1971 following the record turnouts at Mexico’s ‘unofficial’ women’s world cup. 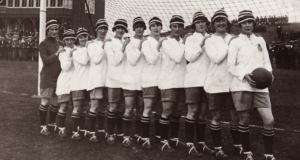 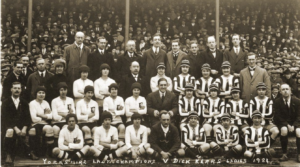 It has been a long, hard slog to bring women’s football back into the English mainstream, but last night’s game and this summer’s tournament may have seen more progress made than in the previous fifty years.
For many, it may seem that this freshly enjoyed sport has come out of nowhere, but several of the English players have taken the time to name-check their predecessors who played in empty stadiums and held down part-time jobs to be able to play. It’s definitely progress!

It is also worth noting that this summer’s Commonwealth Games is the first example of para-sports being included in the main event, rather than held a few weeks later, with smaller crowds and lesser TV coverage.
It makes you question what else can be achieved in today’s age, what other unjust presumptions and unchallenged norms could be defeated?

Alan Turing, the mathematical genius behind the enigma decoder, who received chemical castration for being gay and later took his own life, once said:

“We can only see a short distance ahead, but we can see plenty there that needs to be done.”
And so, what’s next?