Robert Kraft and Jeffrey Epstein. Do either of those names mean anything to you? It’s possible that the English amongst us may not have heard of these men before, but for those following along in the US, I’m confident their notoriety hasn’t escaped you.

For those unaware, let me give you a quick update.

Robert Kraft; 78-year-old billionaire owner of the New England Patriots, one of the most successful American Football teams of all time, was charged in February with two counts of soliciting sex from a massage parlour in Florida. It has been reported that the women working there were engaged in prostitution and potentially victims of human trafficking. In a classic case of wrong place, wrong time, father, husband and one of the most highly regarded club owners in the NFL, was caught, quite literally, with his pants down…twice. The case against him is currently crumbling, as his well-paid legal counsel do what they do best.

Jeffrey Epstein; 66-year-old millionaire financier from New York, with a list of famous associates including President Trump, Bill Clinton and our very own Prince Andrew, is currently in custody in Manhattan awaiting trial for multiple counts of child sex trafficking. Epstein, a registered sex offender, received an 18-month jail sentence in 2008 after a plea deal with state prosecutors for the offence of soliciting sex acts with a minor. On July 6th this year, Epstein was once again arrested and charged in response to further evidence of sexual misconduct with underage victims.

As both of these high-profile characters spend untold sums of money in protection of their freedom and reputation, I wonder how we should look at their cases? Do these characters exist in the same category? Are they both dirty old men who should know better or does Kraft, by simply paying for sex (allegedly), deserve our sympathy for being caught doing what thousands of men do every day? What, however, if he has unknowingly caused another to be controlled, coerced and forced against their will to perform said acts? Does that change things? In the Police we would often need to establish the suspect’s ‘mens-rea’ of a crime, (the intention or knowledge of wrongdoing). Does a customer’s ignorance to a sex worker’s circumstances, or lack of mens-rea, excuse their involvement or culpability in human trafficking?

Though I usually try to avoid seeing life through the monochrome lens of good and evil, I can comfortably say that, as an individual found guilty of soliciting a child for sex, Epstein fits quite snugly for me in the category of bad guy. 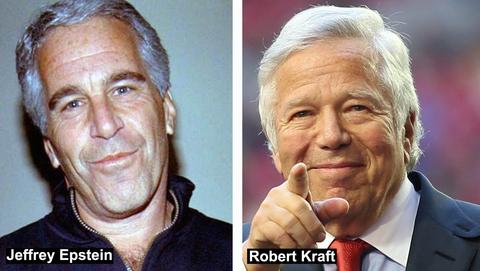 I wonder what picture your mind paints, when you hear the words ‘human trafficking’? Bands of dark-skinned men with shaved heads and bomber jackets, overloading crowds of desperate people onto inflatable dinghies heading for European coasts? What about Albanian gangsters with wispy beards and eyebrows that meet in the middle, running illegal brothels full of beaten, emaciated and drug addicted young women? Perhaps? How about white, upper class socialites who travel by helicopter, private jet and limousine, fulfilling their sexual desires in the belief that money can buy them anything they want, including impunity?

These recent high-profile cases serve to highlight the fact that human trafficking is not the exclusive possession of the desperate and deprived third world, but also exists amongst the elite lives of the global north. We are therefore forced to readjust the dial when it comes to picturing exactly what evil looks like in today’s world.

It’s also been interesting to see the words ‘human trafficking’ attached to both of these front-page scandals, when only a few years ago they would have been classified otherwise. The first comprehensive piece of legislation to govern against human trafficking in the US didn’t come about until the year 2000 (The Trafficking Victims Protection Act) and the UK only got the Modern Slavery Act in 2015! That’s not to say that these crimes would have gone unpunished under alternative legislation, however it highlights the shockingly recent point in history in which we began to see, acknowledge and legislate this ancient crime.

In other news, before leaving office this month, British Prime Minister Theresa May appointed the country’s first independent anti-slavery commissioner, and also pledged £10 million of government money to build an anti-trafficking research centre aimed to develop our capacity to combat this heinous crime and better support those ill-effected. So, there it is, the silver lining, it’s always there when you look hard enough.